Rescue Food from your Local Dumpster!

July 13, 2012
A lot of people feel that there's not enough food to go around in this country but I've watched, witnessed and participated in something that says otherwise.  It's more about distribution of food than food produced.

Several months ago I watched the movie DIVE on Netflix.  The video clip below is a preview of the movie:


A friend of mine sent an email asking for help.  She volunteers in the community by bringing food from  a few of the local grocery stores or warehouse club to the local soup kitchen.  She was going to be out of the country for a few months and needed people to cover the days she would have normally been doing all the shuttling of the food from the store to the soup kitchen.  I volunteered along with several other people to pick up food a couple days a week as it worked out with the schedules of driving kids to camp, vacations etc....

It was one thing to see a movie about the food waste in this country but to see it in person blew me away!  Monday of this week I had to bring my son to camp so I wasn't able to do the food drop so my husband volunteered to do it for me.  Today (Friday) my husband wanted to help me out so we made it a family activity.  We went to the local warehouse club and two words: Oh MY!  There were 4 large carts worth of breads, croissants, muffins, fresh veggies (many organic), fruit and lots of meats/poultry (a lot of it was organic).

We made two trips to the food shelter/soup kitchen because it was impossible to fit all of it in our Jeep in one trip (and we stacked it to the ceiling).

Here are a few pictures of all the food that was picked up and delivered today: 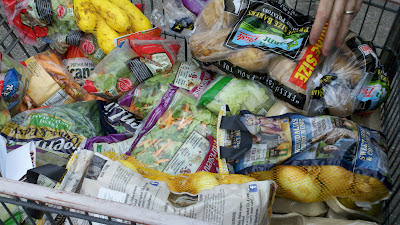 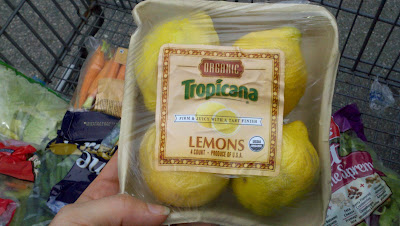 The question is how come so much food gets thrown out and why is there so much available to throw out?

We had a conversation with the employee at the club warehouse and they need to have 90% capacity on their shelves.  Why?  because if it's not on the shelf then that's a missed sale.  We live in a society where we are used to getting what we want anytime we want it.  This of course leaves a lot of excess waste and the day before or the date of a food expiration it's pulled off the shelf to be thrown out (if it's not already arranged to be brought to a soup kitchen/shelter/food bank).

So what happens at the local soup kitchen?  When they have excess they then call other local food banks or soup kitchens to distribute the food via volunteers.

So what can you do?  Check out your local grocery stores and food banks/soup kitchens and find out where all the food is going and what help they need.  Then volunteer even if it's just for a couple days a year.  It's for a good cause and it's a great learning experience for children as to how valuable food really is and where it should be going.  In people's hungry bellies not the landfill!

A few facts borrowed from the DIVE Website (http://www.divethefilm.com/facts-about-food-waste.aspx) :